View source
watch 01:36
We're Getting Mutants in the MCU - The Loop
Do you like this video?
Play Sound

Kindergarten
Nugget is a main character. He does not directly interact too much with Cindy, but has knowledge of her boyfriend-obsessed personality and accepts Cindy's Flower as an offering of friendship from the protagonist. Nugget also has the corpse of Cindy's dog in his hideout, the Nugget Cave, and is aware that the janitor killed it.

Nugget and Buggs have an antagonistic relationship, and every day at lunchtime, Buggs throws slop at Nugget's head. Nugget attempts to get the protagonist to kill Buggs in his route and the teacher's route. Interestingly enough, in Buggs's route, Nugget unknowingly helps him by giving the Principal's Device to the protagonist.

Nugget is in love with Lily and tries to write her a love letter during his route, though it ends up being unsuccessful, and everyone is disturbed by it. Lily does not trust Nugget that much. During his route, Lily ends up as an unfortunate victim of the situation during the quest to get the Five Nuggets of Friendship. Lily becomes mortified and makes you go away.

They have an antagonistic relationship as well. The teacher frequently insults Nugget by calling him a social outcast, and if the protagonist shows a Chicken Nugget during Show and Tell, she says being Nugget's friend can be challenging. Nugget knows that the teacher is out to get him and keeps his distance as such.

Their relationship varies depending on the choices made. The protagonist can either gain Nugget's trust, only to betray him in the end and cause him to die in the teacher's route, become his friend by finding all the "Nuggets of Friendship" (Chicken Nuggets) and obtain his Quest Item (Billy's Note) in his route, or just ignore him/fail to become his friend.

It...fixes him. I don't know what's wrong with him to begin with, but they seem to make him better.—The Principal, referring to the pills he gives Nugget.

Nugget was originally the target for The Principal's experiment, but since Billy saw one of the creatures' bodies, Nugget was spared and Billy ended up being the test subject. Nugget is devastated by Billy's disappearance, so the the principal gives him pills that cause him to forget details about his disappearance. Nugget also has the Principal's Device, which is given to students that the principal believes could be hazardous to his evil plans. The principal and Nugget never directly interact in the game, but it's assumed they have an antagonistic relationship, since the principal caused Nugget's best friend to disappear.

Billy was best friends with Nugget. Nugget was devastated by his disappearance. The principal gave him pills, causing Nugget to forget many details about Billy's disappearance. Billy gave Nugget a note right before he disappeared.

If you talk to Nugget, he will tell you that he has no friends and asks to be your friend.

Nugget will ask you to find him a Magnifying Glass if you talk to him when not on his route. This can be done by obtaining a Bottle of Pills prior to this in the principal's office, giving the Yo-Yo to Jerome, or getting a Single Pill from Nugget. If you do so, he gives you the King Tower Beetle.

Nugget will say that no one eats lunch with him since he has no friends, and the only option is to walk away from him.

If you are on Nugget's quest line, he will provide an opportunity to poison Buggs and earn another Nugget of Friendship.

If Lily commits suicide by jumping into the Nugget Cave, Ms. Applegate will try accusing Nugget of killing Lily, causing Nugget to declare that the teacher will not take him alive and subsequently die by jumping down the same cave.

Now, you can show the class one of the nuggets that Nugget gave you.

End Of The Day

Nugget will pull you aside and give you Billy's Note. This is one of the Items need to complete Lily's mission.

Nugget plays a small, yet comedic role in Cindy’s mission. After Lily commits suicide by jumping into the Nugget Cave, Ms. Applegate will blame Nugget for her death, causing him to jump after her, denying the teacher the opportunity to push him in herself.

Nugget is the last to be eliminated in Ms. Applegate’s mission. The player has to gain his trust during morning time if he eats a Poisoned Chicken Nugget, starting the quests for the five Nuggets of Friendship.

During lunchtime, Nugget will ask the player to poison Buggs in order to receive an Antidote in return.

Finally, at recess, Nugget will let the player down the Nugget Cave, where you can find the remains of Cindy’s dead dog. Bringing the Dog Corpse back to the surface and showingMs. Applegate will result in her "accidentally" pushing Nugget down the cave.

Alternatively, if the player shows the corpse during Show and Tell, Ms. Applegate will blame Nugget for Biscuit’s death and send him to the principal’s office, who will then say he was wrong to trust his new friend and will swear vengeance.

In order to progress in Lily’s mission, the player has to pressure Nugget into talking about Billy, which will send the player to the principal’s office.

He is missing an arm.

Nugget reappears in the second game, with his own mission: If you can Dodge a Nugget.

He also makes an appearance in “Cain's not able” as a major character for digging the hole(which is also his nugget cave in rest of the missions), and as a minor character in “Breaking Sad” and “Opposites Attract”

He is found behind a grate at the start of the day, trapped in the collapsed “Failed Nugget cave”. He will appear in Morning Time with his arm bleeding if you didn’t send Bob to rescue him with Bob’s Toolbelt, from “A tale of Two Janitors.”

Nugget will die if, in “If you can Dodge a Nugget”, you go to the microwave, heat up the nuggets, enter the cafeteria, and leave again. When you re-enter, he will be dying. You can dump the nuggets on him, or if you get Tenders from Agnes, you can give him the cat. Killing Nugget will give you his outfit.

Nugget appears as a minor character in "Creature Feature", standing around in the Nugget Cave, letting you in/out.

For certain activities in #Kindergarten2, a buddy might start following you to your next objective. Whoever is following you may help you access new options and outcomes. #madewithunity #pixelart #nugget

We've been busy. So has #Nugget. #Kindergarten2 #indiedev #pixelart

When your friend is having a bad Tuesday so he starts banging his head against a wall. #nugget #pixelart #indiedev

Nugget from the 3 point line! Did we mention that you'll have the option to go to gym in #Kindergarten2? (artwork may not be final) #pixelart #indiedev #madewithunity #nugget

I'm happy to announce the return of Buggs and Jerome! Jerome is a little upset right now though... (artwork may not be final) #kindergartengame #indiedev #pixelart 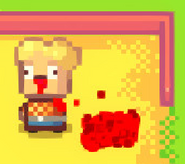 Nugget without an arm and without hair. Well, LOTS of hair.
Русский
Community content is available under CC-BY-SA unless otherwise noted.
Advertisement